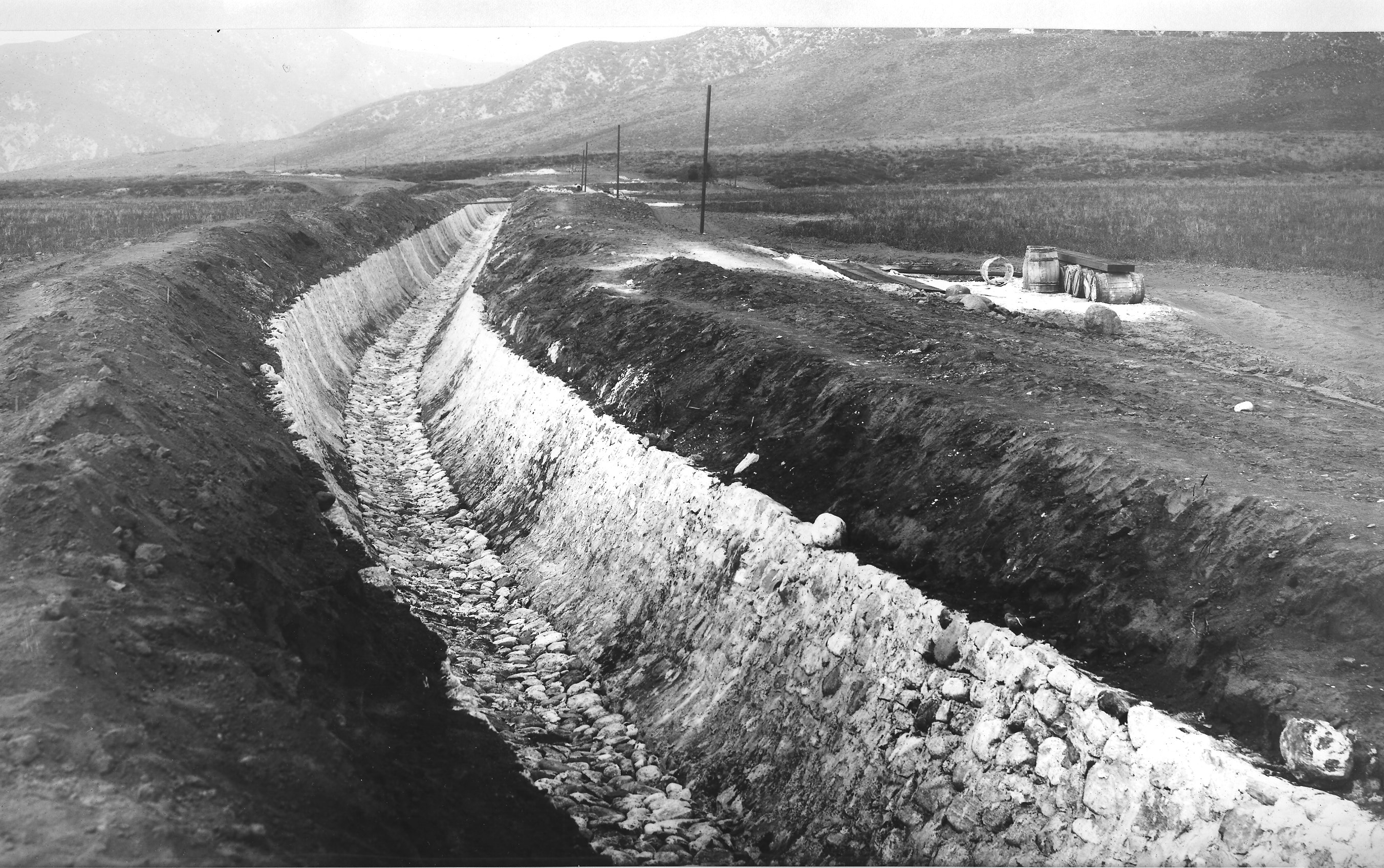 The original dam, built to provide irrigation to citrus growers in the Redlands area, proved inadequate to the need almost as soon as it was completed in 1884.

To compound the problem, the lake was completely dry during the summers of 1898, 1899, 1900, and 1904. The end result was that a higher dam was needed to provide greater storage abilities, and the Bear Valley Municipal Water Company was formed in 1903 to provide an assured water supply to growers down the hill.

One of the first tasks was investigating construction of a new dam. It would be, according to former company manager Horace Hinckley, the fourth dam at the site - the first a temporary 8-foot-high mud dam built in 1883 in preparation for the main dam; the second a rubble masonry single-arch dam finished in 1884 which actually formed the lake; and the third a rock fill dam started in 1891 and never completed.

After deciding that the dam at Filirea Flats to the south on the other side of the ridge wouldn't be adequate, the water company awarded a contract to J.S. Eastwood to build a new rock-fill dam with reinforced concrete facing 150 feet downstream from the existing dam. The dam was built in 1910 and 1911.

Eastwood's plans were adequate to take another 7 feet of water pressure than was bid, so he was given the go-ahead to do so. The decision, however, resulted in the water company flooding land they didn't own, an embarrassment that took until 1922 to resolve.

Eastwood's plans also called for 1-inch diameter steel reinforcing rods in the arches, but no invoices indicate the steel was purchased, and the rods have not been detected through physical testing, leading many to believe they were never included.

A Sight to See

The existing multiple arch dam is 15 feet higher than the old structure and doubled the holding capacity of the lake. Construction became a tourist attraction in itself. A popular spot was Castle Rock, where workers lived in cabins built for their use. Those cabins later formed Bellow's Lodge.

Blasting would be done during the worker's lunch hour. Bill Knickerbocker, the dam's caretaker from 1906 to 1918, lived in a stone house built in 1890 above the dam to the south. His daughter, Ellen, had memories of her mother hiding her and her sister in the house or behind a large boulder during the blasting. Flying rocks often hit the roof, and 1 crashed through a window onto little Gertrude Knickerbocker's empty. bed.

The area now covered by Big Bear Lake had been heavily forested, and local lumbermen like Clifford Lynn were more than happy to contract to cut down and blast out the unsightly trees peppering the lake. The effort continued for years, with woodcutters venturing out on the ice in the winter to fell the trees, and then returning after the thaw to haul them to Lynn's mill pond by his saw mill at Windy Point by boat. Everyone in town would set their clocks by the mill whistle, blown 4 times a day, 6 days a week.

The old dam was a popular fishing spot until the lake filled up several years later, covering it. Location of the 1884 dam is marked by a plaque on the south shore for modern visitors.

Fishermen haven't always been the people stationed by the dam. During World War I, armed guards were stationed at the spot 24 hours a day for the duration of the conflict.